The term “third culture kid” was first coined by researchers John and Ruth Useem in the 1950s, who used it to describe the children of American citizens working and living abroad. It refers to those of us who have birth citizenship in one country, but grow up in a different country. It also applies however to children who have a parent from another country and who have grown up in two different cultures. This upbringing can leave you with the feeling of not belonging in any single culture or place. You may be perceived as a foreigner in the countries you grew up in. Or you may be perceived as a native but have hidden feelings that you don’t belong.

Growing up between two countries I felt I was operating much of the time as a ‘double agent’, passing as native in both places but not really belonging in either. This left me with an interest in identity and belonging and how to find a voice of one’s own. It was a revelation to me when I found the book ‘Third Culture Kids: Growing up among worlds’ by David Pollock and Ruth Van Reeken. It was a profound relief to see my experience described so accurately and to realise that my feelings were so clearly the result of a particular set of circumstances. It helped me feel so much less alone, and to see my feelings as natural and understandable.

Third culture children – and the adults they become – are often faced with challenges such as:

Searching for a place in the universe is part of the human condition but if you are a third culture kid this can be a particularly sore process because the forging of an identity is often conflicted.

Talking it through with someone who has also been there can be a healing experience. Taking some time to acknowledge and grieve perhaps hidden losses and giving the inner child some attention is a gift to yourself that you may have been waiting for for a very long time.

THE HOUSE OF BELONGING

I awoke this morning in the gold light

turning this way and that

thinking for a moment it was one day like any other.

But the veil had gone from my darkened heart

and I thought it must have been the quiet candlelight that filled my room,

it must have been the first easy rhythm with which I breathed myself to sleep,

it must have been the prayer I said speaking to the otherness of the night.

And I thought this is the good day you could meet your love,

this is the black day someone close to you could die.

between this world and the next

and I found myself sitting up in the quiet pathway of light,

the tawny close grained cedar burning round me like fire

and all the angels of this housely heaven ascending through the first roof of light the sun has made.

This is the bright home in which I live,

this is where I ask my friends to come,

this is where I want to love all the things it has taken me so long to learn to love.

This is the temple of my adult aloneness

There is no house like the house of belonging. 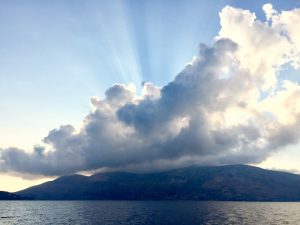